The Truth About Forgiveness

Forgiveness can mean that you must forgive again and again. 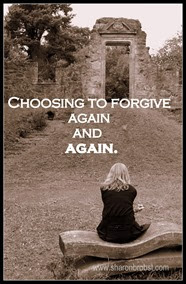 Recently I’ve had several hurtful things come up to surface again. They were hurtful experiences of betrayal by those that were thought to be on my side. Those that I considered friends. The wound was deep and I must admit caused me to withdraw from relationships once again. My response in the past has always been to withdraw, build the walls higher, thicker and resolve within to never let hurt come again.

This time God wouldn’t let me build my walls. God worked on tearing them down. It took a while. He was patiently faithful in helping me see the need to forgive. To forgive not just in this but in past betrayals, past hurts that have caused me to prefer isolation over community.

So now as I face this emotion once again, remembering the past betrayal and hurt, I am faced with a choice. Do I allow the enemy to use it, making me angry again and feel the hurt all over? Oh my flesh wants to cry, kick and scream! I want to go back and make this right! I was wronged and there was no apology, no setting the record straight! The emotions and hurt threatened to rise up! In this moment if I would listen to my flesh (my enemy) I would sin.

But I  choose to forgive. Again and again.

Just so you understand, I am not speaking of one who hurt me again but of allowing the memory of a hurtful experience hurt me again. Both would require the same response. That response would be to forgive.

I use to believe that if a hurtful memory came up again and again it meant that I didn’t really forgive the first time. I no longer believe that, for I understand that often my enemy will take those opportunities to tempt me to sin. He reminds us of a hurt, holds it over our hearts and wants us to become resentful, angry or bitter. We must choose to forgive again and remind our enemy and ourselves that we've chosen the path of forgiveness.

So when those times of painful memories arise thank our Father for the opportunity to forgive once again.