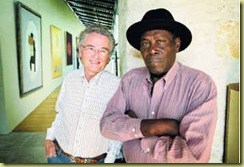 I just finished reading a novel based on the true life story of Denver Moore and Ron Hall. The title of the book is Same Kind of Different as Me. It’s an excellent book that I recommend reading. It has much insight into the relationship between a homeless man and a multi-millionaire. I was challenged, encouraged and convicted as I read this true story written in their own words.

Over the next few blog post I want to share a few things that are on my heart as a result of reading this precious story. I will do my best not to give away too much of the story as I share.

Denver is homeless and has not had very many positive experiences in lasting relationships. When he meets Ron and they begin to become friends Denver asks him what seems like a very strange question. His question is this, “Why do white men catch and release fish?” Ron goes on to explain that it’s for the sport of it. Denver then shares how a when a black man catches a fish he keeps it and uses it to feed his family. Denver could not understand the concept of catching something of that kind of value and then just releasing it.

Denver then said to Ron if you want to be my friend I don’t want to be like that fish that once you catch it you then release it. I want to be a friend you keep.

I was struck by the honesty of this man. He had grown tired of people coming into his life taking what they wanted or doing for him as long as they got something and then “releasing” him.

We aren’t any different than Denver. Don’t we long for friendships that last through the good times and the bad?

Yes there are those people in our lives that come and go, they touch us for only a season and then they are gone. I am not talking about those relationships. I am talking about those friends that we begin to invest in spiritually and emotionally but when things get hard they “release” you.


What do you think? Do you think we, in today’s culture, have lost the true meaning behind friendships? Have we become too self absorbed? Are we too busy with things instead of investing in people? Do we just want an easy button to push when things get hard instead of working through them.

Let me ask another question. If God clearly brought someone into your life and knit your heart with theirs would you pursue them? What if they were homeless? Poor? Needy? What if they didn’t pursue you? Do you just give up and say “I tried!”? Or do you keep fighting, pursuing the person regardless of how hard it may become.

I want friendships that I “keep”. I want to be known as a women that doesn’t give up on friends. I want to begin looking at those God brings into my life differently. I want to look them as “keepers” not “catch and release”.

Email ThisBlogThis!Share to TwitterShare to FacebookShare to Pinterest
Posted in: Relationships, Sisters in the Lord