Is My Ministry Better Than Yours?

“This has been on my heart for months. I’ve chewed on this, prayed about it, and it just will not let go. Therefore I am writing it out to process it and hoping it doesn’t come across as a “rant” but from a heart filled with grace and desiring to speak truth in love.”

There is an interesting phenomenon that I often see among people. In order to feel like we are doing the right thing or fighting the right cause we make others feel like they are fighting the wrong cause. Or at least make them feel as if our cause or ministry is better. If our 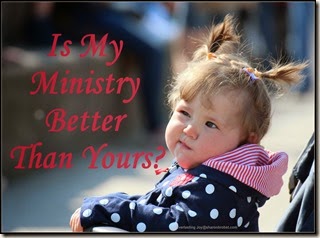 I wish I could say it’s only among those outside the walls of the church, but unfortunately it’s not. It seems to permeate all of mankind. For some reason we have a deep need to feel that we are doing what is most important. We need to know we are fighting the right battle. We need to be sure we are on the right side. I don’t know about you, but I am tired of jumping on the latest “cause” bandwagon hoping that this is the right one.

We are all prone to it. Recently I was listening in on a conversation with several people who where criticizing a church for using their many resources to begin a new ministry when there are plenty of needs elsewhere. In fact, in their opinions, there were dire needs being neglected at the cost of this new ministry. I felt their frustration and their pain. I understood, I too had moments of similar thinking, both presently and in the past.

Personally, I am passionate about helping those who live in my community who have no hope of a better life. They are trapped in suffering and cycles of many forms of poverty. They are trapped in the lies they’ve been told and no one is speaking truth to them. I see a generation of young people (outside the church walls) who do not know God. Unlike the generations before them they do not understand godly morals, sin, or even the truth about love. They have bought the lies of the world and it seems there is no one to tell them anything different. They believe in a God that does not even exist but is a distortion of what others tell them. They have no idea who God really is. To be honest, at times, I can get frustrated that others do not see what I see. They do not share my passion.

But I forget that they are often called and see things I do not. They do not share my passion because God has called them to something different. God has placed a passion within them to go to other countries. He has called them to adopt orphans, to fight slavery, and to reach the utter parts of the world. But He has called me, and you, to other ministries.

The hand of the body of Christ should not feel shame, or insignificant, just because she is not the foot.

Why must we shame one another for being passionate about what God has laid on our hearts to do? Why do those who are serving in small ways feel insignificant compared to those doing big things? Each one of us have lived different experiences, suffered different pain and most often our ministries come out of what we have suffered. What better person to understand the pain of poverty than those who have experienced it? What better person to adopt a child than those who can not have children or who, because of various other reasons have that burning passion to do so? I am reminded of 2 Cor 1:4 that says we are able to comfort because we have been comforted. And 1 Cor 10:13 that reminds me that nothing is unique to me. Whatever others have been through there is someone who understands.

Bottom line is this, there are enough resources and people in God’s kingdom for all the passions, causes, ministries and callings which He has laid on the hearts of His children. Instead of shaming or criticizing others for what they are doing (or not doing) perhaps we should be grateful that God has raised up someone to meet that need. Instead of giving in to feelings of insignificance because I am only reaching one person at a time instead of thousands I need to rest in particular God’s calling of my life.

God has not called me to end slavery. I see the need, the atrocity and horror of it. I can even become angry about the injustice of it. I can donate money, pray or offer my encouragement of what others are doing, but I am not called to go into the trenches. I am not called into that specific ministry. I understand God has called others to go battle it and fight. But He did not call me and there is no shame in that. He has called me, and you to something totally different. Why can’t we understand that and stop criticizing one another for what God has called each of us to do?

You might be a “hand” or a “foot”, I might be an “eye” or an “ear”, but we are all apart of the body so let’s give one another grace. Let’s support what the feet are doing without making the hands feel like what they are doing is not important.

May we celebrate our differences. Let us rejoice in the uniqueness that God has called us to! And together the Church Body can reach the world for Christ.

For the body is not one member, but many… But now God has placed the members, each one of them, in the body, just as He desired. If they were all one member, where would the body be? But now there are many members, but one body.  And the eye cannot say to the hand, "I have no need of you"; or again the head to the feet, "I have no need of you." On the contrary, it is much truer that the members of the body which seem to be weaker are necessary; and those members of the body which we deem less honorable, on these we bestow more abundant honor, and our less presentable members become much more presentable, whereas our more presentable members have no need of it. But God has so composed the body, giving more abundant honor to that member which lacked, so that there may be no division in the body, but that the members may have the same care for one another. 1 Cor 12:14-25