Motherhood, in Life and Ministry 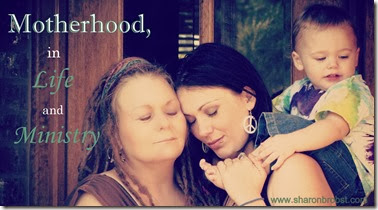 There were days when my boys were young that I was just tired and wanted to run away. Seriously. I didn’t want to even hear the word “mommy”. In fact, I was one of those girls who grew up saying I’d never have children. I did not have some overwhelming desire to be a mother.

I often wondered what God was even thinking when He allowed me to be a mother. I would grow weary of doing for my children without appreciation or notice. I would be selfish and just want to get away. Why couldn't I be like those other mommy's that seemed to have it all together and LOVE motherhood.

Then God, in His faithfulness and gentle ways would cause my heart to look upon those precious little faces and my heart would remember truth. The truth that He did call me to be a mother. He placed these precious, loud, curious, rough and tumble boys into my arms with a heavenly purpose in mind. Yes God desires us mothers to raise them for Him, to teach them the word and show them the love of the Father. But, I believe God also give us children in order to teach us.

They teach us to be a mother. They help us understand the Father and His love, patience, mercy and grace. So often we, as mothers, get so caught up in trying to do and be what we think a good mother would do and be that we forget the lessons that God is trying to teach us through our raising children.

In those moments that I wanted to run, give up and give in I learned to run to God. I learned that it was in His strength I could go another day. It was because of Him and what He was doing in my heart that I would learn to keep on fighting for my children. After all if I wasn’t teaching them, loving them, holding them, praying with and for them who would? No one. I was the one God called. I would be the one who would lead them.

Over seven years ago when I led me into women’s ministry I found these same emotions arising. I would become weary of being a spiritual mother. I would become frustrated in the fighting for “children” who seemed to not care. Day after day I would fight battles within and outside that threatened to rendered me useless. My enemies, were my flesh, Satan, the world and the very ones I was trying to minister to. The lies, betrayals, gossip and criticism at times brought great bouts of  discouragement. I wanted to quit, run away and give up.

But God has called me, and so, just like when I felt this way raising my boys, I learned to once again run to Him. God, once again being faithful, reminded me that it’s not about me, or how I am feeling. It’s about them, what’s best for them, and what they need. It’s about  who they need me to be – who God expects me to be. I was reminded that I have a God who empowers me to do that which He has called me to do. He called me to be a mother. This my dear friends is a blessing – a high calling. And I had learned that God will enable me to rise above my flesh and do what He has called me to do.

So today God continues to call me into “Mothering”. As I look back I can see how all the lessons beforehand led up to this role as a "mother". The women God brings to me today are broken, many know nothing of God let alone what it means to be loved by a mother. God is calling me to mother His lost children. Children who do not know Him or know very little about Him. These women, these young girls need to see and experience what being a mother really is about. They need to hear the truth, not only about being a mother but about their heavenly Father. They need to know they are heard, seen and understood. They need mothers who have not only “been there” but who are real and honest about the struggles, and heartache of mothering.

This journey has only begun and I stand with great anticipation to see all that God will do. I am thrilled to serve God in this way. I am humbled that He has chosen me to help Him save these girls and their unborn babies. Working in a pregnancy center will bring new, hard challenges I know and I fully realize that there will be day that I will not  “feel” like fighting for them. I will grow weary and feel  like giving up.

Photo courtesy of morguefile.com by greyerbaby