I Can’t Forgive Them!

“You don’t understand what they’ve done to hurt me!”

“They keep hurting me, over and over!”

“They aren’t remorseful for what they have done!”

“How do you forgive someone who will not admit what they did to you?” 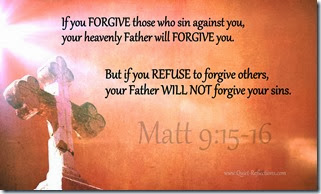 I have heard these and more from many I have spoken to. Their hurt is deep. They feel broken inside. They have been left with scars that seem to never heal.

Their pain comes from what others have done.

I have been here. I understand.

I would try over and over to forgive as an act of obedience to the God I loved. I would remind myself that HE forgave MY sins AGAINST Him. Horrible sins of murder (Matt 5:21-22), idolatry, adultery and list goes on and on…

Something happened unexpected as I prayed, God began to show me my own heart instead. You see I was a wretched sinner, but God looked down on me with mercy and love. And with a marvelous grace, I will never understand, He sent His Son to die so that MY sins could be forgiven.

I did not ask Him to. I did not, do not, will never deserve His Grace.  And yet He gives it to me freely.

I began to ask “How am I different than those who have sinned against me? Jesus died for their sin too. They, like me, are sinners in need of a Savoir.” They are no different than me. Not really. We are both sinners. We both have wronged another. Our actions and words have wounded and hurt others.

At the cross Jesus took upon Himself the sin of mankind. MY sin and THEIR sin.

To say they don’t deserve God’s forgiveness, mercy or grace is to say the same of me. It also says that I do not fully understand the GRACE that God gives to me.

I know it’s not easy, in fact humanly speaking it’s impossible. I must remember that it’s a process of letting go of the hurt and giving it over to God. I must remind myself that He has forgiven me of SO much, how can I not forgive them?

We can only truly forgive when we allow the pain and the hurt to take us to the cross where we can, once again, gaze at the sacrifice of Christ. It’s at the cross that we must preach the gospel to ourselves everyday and then we will find it easier to forgive as Christ has forgiven you.