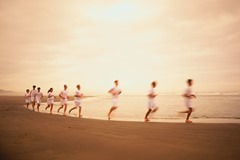 In my last blog post I shared how King Asa was a king that sought the Lord. He removed idols from the kingdom and He restored the things in house of God.

At this point you could say that King Asa was off to a good start. A life that pleases God. A life that seeks God in all he does. He was running his race and he was winning, so to speak. He was living a life of peace in the land. But if you read verse 19 of chapter 15 you see that things change in the 35th year of his reign.

Beginning in 2 Chron 16 we see that war breaks out. Now you would think that King Asa would remember that in the past God helped them defeat an army of a million men. (16:8-9) King Asa had prayed to God (16:11) for help and God answered. (16:12-15) But this time when war comes King Asa takes matters into his own hands. He doesn’t seek God’s counsel. He makes a treaty with the king of Aram.

Was he over confident in his own abilities? Had he became complacent during those 30 plus years of peace? Scripture doesn’t tell us why this change in Asa. All we know for sure is that when he was in trouble this time he relied on man (King Aram) for help. So we know something in the heart of Asa had changed. King Asa did not win this battle. God was displeased.

2 Chron 16:7 tells us “…Hanani the seer came to Asa king of Judah and said to him, "Because you have relied on the king of Aram and have not relied on the LORD your God, therefore the army of the king of Aram has escaped out of your hand.” Hanani goes on to remind Asa of the time he has sought the Lord in war and God has answered." and then says “For the eyes of the LORD move to and fro throughout the earth that He may strongly support those whose heart is completely His. You have acted foolishly in this. Indeed, from now on you will surely have wars” (16:9)

I don’t know about you but I like happy endings. Unfortunately King Asa didn’t finish well. He did not have a happy ending to his life. At this point King Asa could have fallen before the Lord in humility and confessed that he had sinned against God. But King Asa did not. Instead he became angry and put the seer in prison. Scripture says he was “Enraged”. He was so upset that not only did he take his anger out on the seer but he also oppressed some of the people. (16:10-11)

Because of King Asa’s actions God choose to give him a disease of his feet. 2 Chronicles says in 16:12 that the disease was severe but even in this King Asa did not seek the Lord. Instead he choose to put his trust in the physicians. Two years later King Asa would die.

As I look at King Asa’s life I wonder about my own walk on this earth. Do I seek God’s council or man’s? Who do I most often put my trust in? My dear sisters I don’t know about you but I want to finish well. I want to come to the end of my life and know that I have finished my race. I want to know that I have ran it with endurance. (Heb 12:1) I do not want to be one that shrinks back but one that has faith to preserve. (Heb:35-39)

How can I persevere to the end? I am sure my list is NOT exhaustive but this is what came to my mind as I was reflecting on Asa’s poor finish.

God wants a heart that is completely His. 2Chron16:9 God doesn’t want bits and pieces of our lives that we are willing to give Him, He wants access to all of our life. God wants someone who seeks Him and Him alone. Our whole life belongs to Him.

We need endurance. We must understand that times in this life will be hard. We WILL have struggles, trials and temptations. When we face circumstances that seem impossible we need to persevere through it in the strength of Christ. We can not run to man (or woman) but we must run to God. (Heb. 10)

Remember past victories.  Hebrews 11 gives us a long list of those who persevered in their faith. We see men and women who faced unbelievable circumstances and yet they kept there faith in the God who would deliver them. Then in Heb. 12:1a we are told “Therefore, since we have so great a cloud of witnesses surrounding us…” Remember the pass victories of others and in your own life. Believe that if God worked things out before He is working things out now.

Lay aside this life. Hebrews 12:1b says “let us also lay aside every encumbrance and the sin which so easily entangles us, and let us run with endurance the race that is set before us.” I think it’s fairly self explanatory and yet not always so easily done. But we must pursue a life that lives separated from things in this world. WE must stay away from those things or people that easily distract us and ends up getting us entangled in to sin. We must lay aside our selfish desires and press on toward a life that finishes well.

Oh Father help me to run my race with endurance. Help me to lay aside those things that keep me from running a good race. Show me those places in my heart that I have held from you. Father I desire to to run a race that is pleasing to You. I want a heart that is wholly yours, a heart that seeks you and you alone. And yet I am so weak. I give in so easily to my flesh!

“O LORD, there is no one besides You to help in the battle between the powerful and those who have no strength ; so help me, O LORD my God, for I trust in You” 2 Chron 14:11