What Name Has God Given You?

The angel of the LORD appeared to him and said to him, "The LORD is with you, O valiant warrior." Judges 6:12

This morning I was reminded of a time when God spoke to me in order to remind me that He was with me. It wasn’t an audible voice. It wasn’t like the angel of the Lord appeared and spoke to me the way He did Gideon in Judges. But still, the words He spoke into my heart were truth none the less. 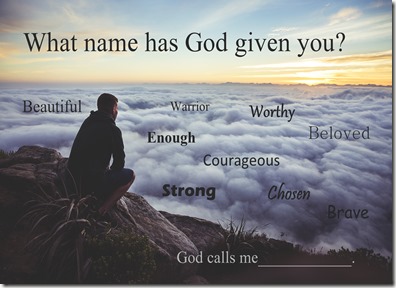 I was fairly new in our church and knew very few people. I had signed up for a bible study that was a pilot1 study written by one of the women attending the church. Each week I would do my homework, come to the study and sit alone. I sat there heart broken, crying tears no one could see. My life had been ripped apart by current life circumstances. As my heart laid there, ripped open as God began to work. He began to expose long ago hurts and sorrow that I had tried hard to forget and push deep down in darkness. I didn’t know at the time just how much I needed this study. I needed to hear from God.

At the time I couldn’t have told you what I needed to hear but, like Gideon in Judges 6:13 I had often wondered where God was. It was a time in my life that I wasn’t sure God was with me. I had deep doubts that He was good or that He loved me. I knew He was a good God filled with love, but I wasn’t so sure that it included me.

It was in this state of mind that God spoke the words, “I am with you. You are Beloved of God.” They barely registered in my heart as my eyes read the words in Romans 9:25 "I WILL CALL THOSE WHO WERE NOT MY PEOPLE, 'MY PEOPLE,' AND HER WHO WAS NOT BELOVED, 'BELOVED.'"  Did God mean me? Was I beloved? Was I truly loved? Did He really see me as His beloved even when I was not beloved? These truths were new to my heart and as they began to settle into the depths of my doubt a small flicker of hope began to spring forth.

It would take a few more years and faithful people of God to walk beside me but I would embrace the truth of who I am.  I would see that my circumstances, past or present, do not have anything to do with God’s view of me. I would see that what I believe and feel are often not based on the truth of God’s word. But most of all I would see that before the foundations of the world ever came into being He knew me. I was fearfully and wonderfully created in His image.2 I was created for Him. He knew all about my life before it ever came into existence and He called me beloved.

When the truth of all that began to grab hold of me my life changed. God whispered, “You are my Beloved daughter” on that day and all the days since. There are days I forget. Days I don’t feel so beloved, but those words do define who I am regardless of whether or not I remember them in any given moment. I can still walk in the truth regardless of how I feel or what is going on around me.

I can walk in truth because in the midst of deep, sorrow God spoke the truth of who I am. Not only did He speak it once, but He continued to speak it through His word and through others as they began to pour His love into my heart and life.

Has God spoken to you during a time of darkness or sorrow? What name did He give you during that time? Did you find it hard to believe? Was it a name that propelled healing or some other God divine purpose? God called Gideon a valiant warrior during a time when he was hiding from the enemy. God called me beloved at at time that I believed I was unlovable. What does He call you?

But now, thus says the LORD, who created you, O Jacob, And he who formed you, O Israel: "Fear not, for I have redeemed you; I have called you by your name; You are mine. Isaiah 43:1-2

1 Beloved of God by Sally Hall

Today I am joining these lovely ladies. Check them out! 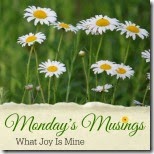