When We Get Stuck

In our suffering we often get stuck in the moment. We do not know the whole story and we get stuck on what ever page we happen to be on. Or perhaps we get stuck in a whole chapter. I am reminded of this idea of being stuck when I read the story of Joseph. Joseph could have fallen into discouragement when his brothers sold him into slavery. But he didn’t. He could have just given up and had a pity party when he was thrown into prison, but we don’t see any record of that. What we do see is a young man who kept on doing what he believed God wanted him to do. He didn’t lose faith and he served His God regardless of what his current circumstances were. In Genesis 39:22-23 we read that God showed him favor in prison, I can’t imagine he would do that if Joseph was sitting around all the time feeling sorry for himself. 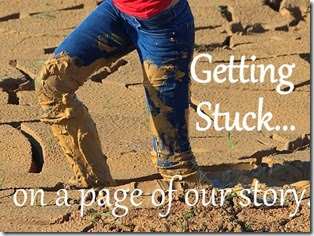 Joseph could have gotten stuck in self pity, but he didn’t. Oh it’s possible that he had moments of questioning God. After all he did ask the cup bearer to remember him so that he could be freed. He went on to say that he was in prison for not good reason. (40:14-15) I am sure that he had moments of doubts, questions and maybe even self-pity. But the cupbearer did not remember Joseph and stayed in prison another 2 years. Two years, that’s a long time to be forgotten. So it’s possible he had moments, but the point is he never got “stuck”.

One reason that I believe Joseph had to have an over all right attitude, one that was not given into major pity parties or discouragement is that in the end Joseph was able to see the purpose of his suffering when he said in Genesis 45:7-8 "God sent me before you to preserve for you a remnant in the earth, and to keep you alive by a great deliverance. "Now, therefore, it was not you who sent me here, but God; and He has made me a father to Pharaoh and lord of all his household and ruler over all the land of Egypt.” You just don’t spend year in self pity and discouragement over your suffering and arrive at this truth.

But what is even more fascinating to me is Joseph’s story in light of an entire nation’s story.  To fully understand we need to go back to Genesis 15:13. God gives Abram a peek into the future when He says, "Know for certain that your descendants will be strangers in a land that is not theirs, where they will be enslaved and oppressed four hundred years.” God was going to make a great nation from the descendants of Abram (later called Abraham). God would fulfill a promise in the midst of a nation’s oppression and slavery.

We see in Genesis 46:2-4 God’s plan for His people when He says to Jacob, "I am God, the God of your father; do not be afraid to go down to Egypt, for I will make you a great nation there. "I will go down with you to Egypt, and I will also surely bring you up again; and Joseph will close your eyes." God was putting into motion a plan to build a great nation. When Jacob went into Egypt there were over seventy of his descendants.  When the nation left Egypt many put the estimate in the two to three million number of Israelites that left. God’s promise to Abraham was indeed fulfilled. They were a great nation.

The story that takes place from Genesis 15 to the end of Exodus involves decades of individual stories. At any point the characters could have gotten stuck. They did often make wrong choices and tried to help God along, but in the end each one remained faithful whether or not they understood the how the story would end. God used the individual stories of Abraham, Jacob, and Joseph to build a nation and fulfill a promise. In the process these men had to overcome many obstacles, losses and suffering. Not one of these men got to see the promise completely fulfilled and yet they remained faithful to God. They believed God was going to work it all out even though they didn’t see, this is faith.

All this causes me to pause for a moment and ask myself, “What part of my story is God using for the bigger story of redemption?” “What page or chapter am I stuck on?” “Can I look beyond today’s suffering and by faith know God has a plan for it?”

Oh beloved sisters, it’s hard some days isn’t it? To look beyond today’s pain, today’s suffering, and just trust. If we are honest we want to be able to see and know the why of it all.

I want to be like Joseph, don’t you? To suffer, yet remain faithful, knowing that God is going to use it. For Joseph, he got to see the purpose of his suffering, at least in that moment. But what he didn’t see was how God would use his slavery, and ultimately the slavery of a whole nation, to fulfill a promise made to Abraham.

As I read this story again, I want to live my life trusting that God will fulfill the promise He has made to every believer, that He will work all things out for His Glory. (Romans 8:28-30) This means I might not see the “good” today, but I can  walk in faith knowing it will come. It means I need to be content if my suffering today is for the benefit of the generations that will come after me.

We do not know how God might use today’s page of our story but this we can trust, this we can know, He will use it for His glory. Can you and I be content and remain faithful with that knowledge alone?

Can we trust God with this page of our story even if we can not see how it all ends in our lifetime?

This blog is part of my 2015 journey through the word. Please click to find more in this series. 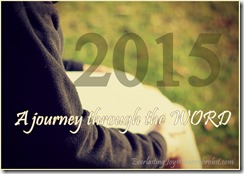