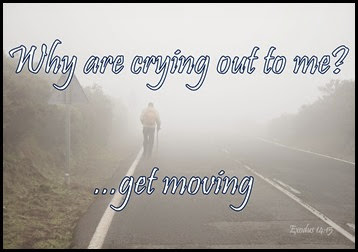 God sets the people free from their slavery. He, through Moses, has just lead the people out of Egypt to a dead end right up to the shores of the Red Sea. Behind them are the Egyptians. The Israelites become frightened. In fact they become so frightened as they look around at their circumstances that they begin to lament how much better is would have been to stay slaves than to die in the wilderness. (Ex 14:8-12)

Moses, knowing what God is about to do (14:1-4, 15-18) and believing that He would save them, says to the people, “Do not fear! Stand by and see the salvation of the Lord which He will accomplish for you today…”(v.13) Moses believed that God had a plan to save them. He trusted that God would not free His people only to bring them out to the wilderness to die. I love what Moses continues on to say in verse 14. He tells the people that God will fight for them so they need to just stop whining.

Okay so it may not say it in those exact words but seriously don’t we need to be told the “keep silent” at times? Just stop your whining about how bad things look right now and trust God to work it all out. I am so often like the Israelites when things get bad and I can’t see any way out. It appeared to them that there was no way out. To move forward, it seemed they might drown, and to stay or turn back they faced an enemy that is far stronger. So they began to complain, instead of trusting in what God was about to do.

I have seriously been in this place lately. I don’t understand what God is doing in my life or where He is taking me. I may not be facing death, but I look around at my life and often begin to whine and complain about the things I don’t like or understand. Like the Israelites I look at my circumstances instead of trusting in what God is going to do.

I love what God says to Moses next. In verse 15 He says to tell the Israelites “to go forward”. In other words, keep silent, stop complaining, and move forward. In verse 21 we see that God tells them to move forward because He is about to make a way for them to cross the sea. But honestly, I can’t imagine that the sea parted and they just joyful ran across singing praises. Maybe they did, scripture doesn’t say. But I can’t help but think they were human and they had just been whining!

Yes they did move forward. They did begin to walk across, they were obedient. But I can’t help but put myself there for a moment. I can only imagine what my thoughts might be and perhaps what there thoughts might have been. I am sure I would be afraid as I walked across the walls of water, I mean who has ever separated a body of water? Would it hold up or will it come crashing down on me? Yet I would walk because somewhere deep inside me I have faith. I would trust, even though I might be trembling, that if God could hold up the water then surely He meant to save me. Surely He would see me safely across the sea and rescue me from the Egyptians. I wouldn’t understand, but I would move.

Oh how I want to live a life that is consistent in this area. Next time I am tempted to start whining or complaining about my present struggles I pray that I will remember to just keep silent, move forward and watch what God is about to do.

I love that! Keep silent, move forward and watch what God will do! Let’s remember that next time we face the seemingly impossible!

This blog is part of my 2015 journey through the word. Please click to find more in this series. 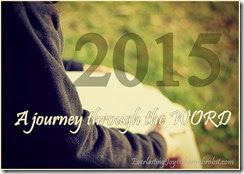