The day grew near. His heart waited in anticipation.

Her heart longed for love. To be accepted, wanted, desired. She was so tired of being a throw away, feeling as if no one wanted her. The thought of anyone ever really loving her seemed beyond anything she imagined. Those who seemed to love always wanted something from her. If she loved, they would leave her.

Love never stay. And yet she dreamed of love. She longed for it. She even dreamed of that day when she would be a bride. Her heart grew with excitement as she thought of the day she would belong to someone. Oh to be truly loved by someone!

She wanted that perfect one who would make her feel whole, to feel loved. She would go from relationship to relationship, but each time she would lose yet another part of herself. She just wanted to feel beautiful. Slowly the ache of loneliness grew. It grew until it almost enveloped her soul. No matter how far she ran, how hard she tried to hide it was always there. A growing darkness within her.

All the while the one who loved her kept waiting, longing for the day when she would be his. 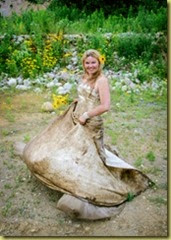 As the ache grew to a depth that it felt it would destroy her she found herself standing in front of a little chapel. There was soft music playing. It was drawing her in. She walked through the door and began walking down the aisle. Her eyes were on the figure that stood at the end of the aisle. His eyes were on her.

Who was this man? Why was she so drawn to him?

In His eyes there was such love, and yet, there was something else. A sadness or pain she could not tell. As she got closer she saw tears running down his face. As she stood in front of him she sensed such great sadness. With tears in his eyes and a voice filled with such compassion, he said to her, “My bride, I have been waiting for you.”

She stood there, not at all understanding why he would call her his bride. He came to her and told her how he loved her. He loved her with an everlasting love and he had waited for her for so long. As she looked in his eyes she began to see her reflection, it was a reflection she was not familiar with. It was a reflection of beauty.

As she looked down on herself she saw that her wedding dress was dirty and worn. She saw the true state of who she knew she was. She was not prepared to be a bride. How could he want her?

She fell to her knees and began to sob. Her heart was broken. She was not prepared for the one who loved her. How she knew this was the one she did not know, but she knew that this love was real. A love that would make her feel whole and beautiful.

Was she too late?

Her entire body shook with sobs as she begged for forgiveness. She began telling him how bad she was and unworthy of his love. Sh 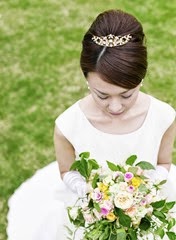 e couldn't be His because she had already give so much of herself to others.

She felt his gentle hand on her shoulder as he said in a gentle voice. “My beloved bride, do not cry. I know your heart. I see the one you will become. I see beyond all the dirt, pain and sorrow. I have already made the sacrifices for your sins that are needed so that you may be clean, pure, whole and worthy of the bridegroom.”

She did not fully understand, at least not yet. His love penetrated deep within her soul and heart. She saw in His eyes healing. As she looked away from Him she noticed that her dress had changed. Instead of being dirty and worn it now looked brand new. It was the most beautiful dress she had seen. It was spotless, it was whiter than snow.

He took her face into His hands and said, “now dear one, go prepare for the day when you will be my bride for all eternity. Go tell everyone what your bridegroom has done.”