The Storm of Rebellion 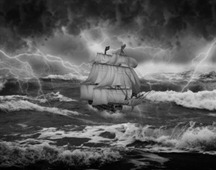 I am currently studying the book of Jonah. The story is not unfamiliar to me. I’ve read it before. I’ve heard sermons. But as I began to slow down and observe the text so I could really see what it says I come to see things I’ve not seen before.

In Chapter 1 verse 4-5 we see that the LORD hurls a great wind on the sea, a great storm,  the sailors become afraid and every man cries out to his OWN god.  The storm does not stop, it increases.

The sailors then try to help themselves and begin throwing things over trying to make the boat lighter.

But where is Jonah? In the midst of this storm ,that is about to destroy the boat, he is fast asleep. He had not been concerned about the storm. He had not prayed to his god.

The sailors then decide to cast lots to see whose fault it was. Who had sinned against their god? The lot fell on Jonah. When faced with the questions from the Captain Jonah admitted that the storm came because he was “fleeing from the presence of God.”

One thing to point out is that these men were sailors. They were use to storms at sea. But this one must have been different. This storm was not like those they usually see.

The storm grew worse and the winds grew stronger.

So once again they pray. But this time they call on the LORD. They had already tried to pray to their gods to rescue them and nothing happened. They had tried to save themselves but still they faced certain death.

They came to realize that they had to throw Jonah over in order to save their own lives. And when they do the sea grows calm.

THEN do you know what the text says? “the men feared the LORD greatly, and they offered a sacrifice to the LORD and made vows.” (1:16)

Wow do you see it? The sailors began by praying to each man’s god, but God uses Jonah’s disobedience to reveal HIS power and might. The sailors come face to face with the creator God, the LORD. What is their response? They fear the LORD, sacrifice to Him and make vows, they worship the One True God.

I just found it amazing as I realized that God would use Jonah’s disobedience to reveal Himself to these sailors.

The other thing that God showed me  was that so often I am like those sailors when a storm hits my life. When I am stressed or things just aren’t going very well I often go to someone other than God. I might not cry out to other gods, but I certainly cry out (or whine) to my husband and/or friends.

Then comes trying to fix it myself? How often do I try to figure it all out, thinking through the circumstance to see what I can do. And how often when the answer is plainly spoken do I say “No! there has to be another way!?” AND during all the time the storm rages around me and becomes worse.

Wouldn’t it be easier if I would just cry out to God in the first place? Couldn’t I just admit my sin of disobedience and flee into the forgiving arms of my God?

Or maybe….I could just learn to not flee God when He calls me to do something I don’t want to do.

Maybe I could just try obedience the first time.

(Please note: I am fully aware that not all storms in life come due to rebellion or disobedience, but in Jonah’s case it was. And there are times in our lives it is also the case.)