She walked alone down the street unsure of where she was going. She was a pitiful looking little thing with her dress hanging just below the knees, threads hanging down from the hem which was coming loose. It was barely a dress; it looked more like a potato sack that had been made into a makeshift covering. She had no shoes on. Her straggly hair, hung down to her lower back and looked like it hadn’t been combed in weeks. Her tear streaked face 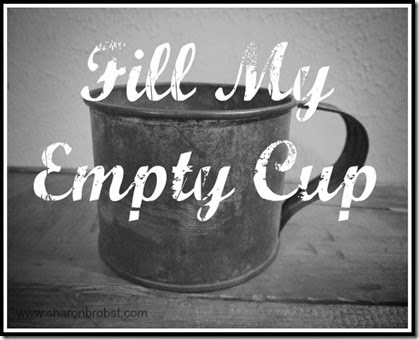 was dirty. Her eyes spoke of heartache and loneliness. If you looked long enough into the depths of her eyes you could see the longing of her soul.

He watched her as she approached a young boy. She pulled from her pocket an old dirty cup. She held it out to him and asked if he could please fill it for her. As he filled it with parts of himself, her eyes began to shine and she smiled.

"Thank you very much sir," she said as she skipped away.

It wasn’t but a short distance until she became that same sullen, lonely little girl as before. Time and time again He watched the girl walk up and down the street asking to be filled by anyone who might pass her way but the joy she received never lasted very long.

He waited until He knew she was becoming weary.  He approached her and ask, "What is it that you need child?" She looked at Him with big sad eyes and said, "My cup won't stay full! Every time someone fills it with love and happiness it just flows out."

"Oh, my child," He said with love and tenderness, "you are filling it up with all the wrong things. Do you not know that if you would allow Me to fill it up with all that I am that it would never be empty again?"

Holding tightly to the cup she eagerly held it out to Him to be filled. "No child, you must let go of the cup. You must surrender it to me. Once surrender then I can fill it to overflowing and you will never feel empty again."

Quickly she pulled the cup back and held it tightly to her chest. How could she trust this man with her cherished cup? What if He took it and she still felt empty inside? At least with the cup there were moments of happiness, even if they were fleeting.

She looked up into His eyes. They were kind eyes, soft, and filled with such love. She looked down at her cup. It was empty, again. The ache in her heart was painful and she was growing weary of trying to keep it filled. Maybe she could trust Him. Maybe she would try.

Hesitantly she lifted the cup up to Him with her hands open. He took the cup from her and as He did she felt a joy deep inside that felt so wonderful that she thought she just might explode.

His eyes danced with joy as He watched her transform into a child that flowed with love, beauty and a joy that quickly become contagious to those around her.

You have made known to me the paths of life; you will fill me with joy in your presence.' Acts 2:28