Have You Been With Jesus?

In a recent blog post (on Acts 2) I wrote “Peter was not afraid to share the truth. The truth of their sin. Their blindness. He was not afraid to tell the growing crowd who Jesus really was, who He is.”  As I continue my readings I am challenged by Peter’s boldness.

I am also saddened because I want to be as bold as he is about my Jesus and my faith in Him. But sadly, the truth is, most often I hide in fear. I am not afraid of death or imprisonment. I am not afraid of rejection of truth. My fear most often comes down to saying the wrong thing or teaching something that isn’t fully true. I live in a world that makes much about education and degrees. A world where it seems that those who have degrees are more recognized and taken more seriously than those who do not. At least it seems that way, and it feeds my insecurities like a ravenous wolf.

It is my insecurities, my issue, my problem. To be in ministry, to share the gospel, to teach the truth about Christ, to walk someone to freedom does not require a 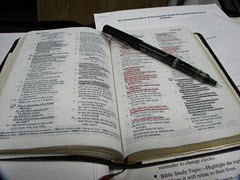 Bible degree. I only need to be with Jesus. I need to allow that truth to sink deep into my heart and life. I have allowed others and the enemy to feed the insecurity that is deep within me. I continue to allow the voices of my past to speak words over me that tell me “I am stupid”, “I’ll never be good enough”, and so many other words that speak death over me.

So what can I do? Recently when I shared this with someone they asked me if I ever thought of going to school and getting a degree. Really? Of course I have, but as I have prayed about it, sought God I have never felt Him urging me toward that direction.  And besides isn’t that just feeding my insecurities again? To me it sounded like, “in order to be good enough, to be taken seriously I need a degree.”

Oh the lies of our insecurities! Those lies build upon one another and feed on each other to the point that you can become paralyzed by fear. I know, I’ve been there and I still can go there, but God is doing a work in me. What is He doing? He is pouring truth into my heart and showing me that I can have confidence, not in myself but in Him.

In Acts as I read about the boldness of Peter and John I am reminded that they were bold because of the Spirit in them. They had confidence in the God who was at work in and through them.

I love what Mathew Henry’s commentary says about what the “educated” most likely thought of Peter and John, “…that they were bred fishermen, and had no learned education, had never been at any university, were not brought up at the feet of any of the rabbin, had never been conversant in courts, camps, or colleges; nay, perhaps, talk to them at this time upon any point in natural philosophy, mathematics, or politics, and you will find they know nothing of the matter…” 1

Jesus says something very similar when they questioned his lack of education in John 7:16-18 when He said "My teaching is not Mine, but His who sent Me. "If anyone is willing to do His will, he will know of the teaching, whether it is of God or whether I speak from Myself.  "He who speaks from himself seeks his own glory; but He who is seeking the glory of the One who sent Him, He is true, and there is no unrighteousness in Him.” Jesus spoke of what He knew and He knew the Father. Jesus was not trying to bring glory in Himself but the Father.

So what about me? What about my “lack of education” and my insecurities? I need to take my cue from Peter and John. When they spoke of Jesus they spoke with much clearness, evidence, and assurance because they knew Jesus. They had been with Him and had been trained under Him. They simply shared what they had seen and heard. They shared what they knew.

I want to be like them. I want my words and actions to be evidence that I have been with Jesus. Again I quote Mathew Henry as he writes so well what my heart feels is true, “ Those that have been with Jesus, in converse and communion with him, have been attending on his word, praying in his name, and celebrating the memorials of his death and resurrection, should conduct themselves, in every thing, so that those who converse with them may take knowledge of them that they have been with Jesus; and this makes them so holy, and heavenly, and spiritual, and cheerful; this has raised them so much above this world, and filled them with another. One may know that they have been in the mount by the shining of their faces.”1

Please don’t miss understand my heart here. I am not saying an education in ministry or theology is bad or wrong. Many are required to gain a degree for their career in ministry. I am not however addressing career ministry I am talking about those who DO ministry in a volunteer position or live life doing ministry.

I believe the message to those who have been “educated” is to be aware that knowledge can puff one self up and your confidence can be misguided. There is the potential of placing your confidence in your degree instead of being with Jesus by studying His words and following His every word.  Also when sharing the gospel the educated can make it harder to understand than it really is. And on the positive those who have studied Greek, Hebrew, church history etc... may have more insight into the scriptures but it doesn’t mean they know Jesus better.

I believe the message to those without a theology degree is to just go do what God has called you to do. Be confident in Jesus and His Spirit at work in you. Study the scriptures for yourself. Pray for understanding. Read books from reputable theologians (after you’ve studied for yourself) for further understanding. Share the work Christ in doing in YOU. Share your testimony of the gospel work in your life.

Bottom line for those with degrees and those without is that like Peter and John our confidence must come from Jesus. Others should be able to tell that we’ve been with Him, breathing in His Spirit, His life and His love.

That is the gospel of Jesus. He died for our sins. It doesn’t take a theologian to share it. Jesus says we are to go and make disciples. Go tell the gospel story, share the good news of why Jesus came. Share His story through your story.

Then walk with them and show them Jesus. Teach them how to study for themselves, to know Jesus through His word. Tell others of His healing power. Jesus can heal our sickness and brokenness. Tell them how He worked in your life to set you free from sin and bondage.

Just tell them about Jesus….

Why do we make it hard so to DO ministry? Why do I make it so hard?