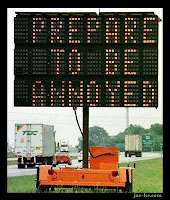 This morning I was in a hurry to get to work and running late. As I was flying down the road I could see ahead of me that it was congested. I could have gotten off the exit but it would be a longer drive and I would be even later, or so I thought. What I didn’t know is there was construction and I’d be sitting in traffic, making me an hour late.

I sat in my car thinking as I moved inch by inch. This was not scheduled into my day. I had work to do, important work. But God had other plans.

Then I began to think about how many times I’ve been on a road, flying through life thinking I am going somewhere fast and around the corner life suddenly comes to a halt and I am forced to move inch by inch.

It happens to us everyday.

A mother has a day planned. It’s filled with important appointments. She is involved in ministry. Mentoring a young mom. She’s about to leave the house, the phone rings, a child is sick and needs to be picked up. Her day comes to a halt.

A pastor is preparing for a sermon. It’s an important sermon, maybe one of the most important to date. He only has one more day to prepare and needs this time to study. A phone call. A family loses a child in a car accident. His plans come to a halt.

A woman involved in ministry. She is working hard to do what she knows God has called her to do. Her parents become very ill. Doing ministry becomes harder as they require more care. Her life begins moving at a slower pace, inch by inch requiring her to take on more of the care giving of her parents.

The mother could call someone to watch her sick child while she ministered. The pastor could have chosen ministry to the multitudes instead of the one. The woman could have chosen to put her parents in a home.

The question is, are we going to look at those interruptions as a part of His plan or become irritated with the direction God might be trying to move us. Will it annoy us that our plans have been interrupted. Maybe the interruption is God's plan.

As I sat there I realized I could have gotten off the exit and probably should have. I would not have been so late. But then again, I had extra time to think and pray before the Lord. God took that time to minister to my soul. He gave me a moment to take a deep breath before moving on.

Show me Your ways, O Lord; Teach me Your paths.
Lead me in Your truth and teach me, for You are the God of my salvation;

Email ThisBlogThis!Share to TwitterShare to FacebookShare to Pinterest
Posted in: Thanksgiving