Reflections of a Prodigal's Father... 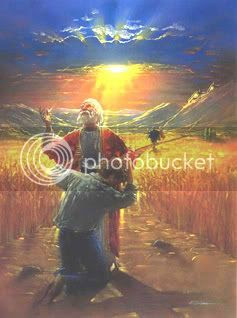 We are all very familiar with the story of the prodigal son. Many have experienced life with a prodigal and as we read the story we tend to focus mostly on the son. My mind recently has been reflecting on the father and what he did and didn't do.

The father did let go. Many of us have those that are prodigals in our lives whether it's a son, daughter, husband, friend, etc. Our first desire is to hold on. Fight hard. But this father didn't try to hold on. He didn't cry or beg his son to stay, he just him let go.

I believe he let go because he understood that his son needed to decide on his own what kind of man he would be. Maybe the father understood that he couldn't live his son's life or make life decisions for him. Maybe he knew that sometimes we just have to let go and trust that God will work it out.

The father didn't run after him or send someone to spy on him and report back. With faith and trust the father let go. The father understood that he could not force his son to return. His son needed to come home willingly.

The father did wait patiently and expectantly. When the son finally returned home the father saw him from a great distance. I don't believe the father just "happened" to see his son that day. I imagine that the father went out every morning to look and pray for his son. He prayed for his son's return.

The father did continue doing what needed to be done. He went about his life. Life on the farm didn't stop because his son left. Why do I think that? Because when the son returned the father rejoiced. If life had stopped, it would have meant the father was worried, angry and bitterness would have set in. We don't see any of that, we see loving forgiveness.

When we are waiting for a prodigal to return we often ask "how long must I wait?" The answer? Until he comes home.

A parent's prayer: Oh Father as I wait for my prodigal to return to you give me patience. Help my focus be on today and what you have called me to do. Show me area's of my heart that have turned from you. Father I am reminded during this time that I am often a prodigal in area's of my life. Help me to see those sins and attitudes and turn from them. Help me to see that I need to be doing your will, while I wait. Use this time Father to grow my heart. To seek Your face in a deeper way.
Written by sharon brobst

Email ThisBlogThis!Share to TwitterShare to FacebookShare to Pinterest
Posted in: Prodigals